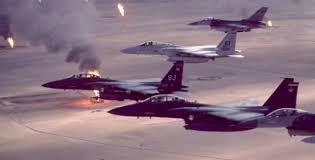 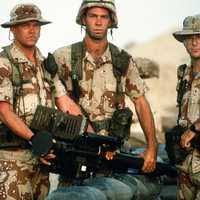 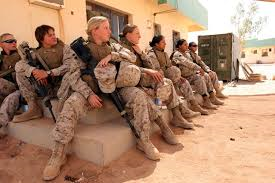 The Gulf War was an armed campaign waged by a United States-led coalition of 35 countries against Iraq in response to the Iraqi invasion and annexation of Kuwait.

The Iraqi military invaded the neighboring State of Kuwait on 2 August 1990 and fully occupied the country within two days. Different speculations have been made regarding the true intents behind the invasion, including Iraq's inability to pay Kuwait the more than US$14 billion that it had borrowed to finance its military efforts during the Iran–Iraq War, and Kuwait's surge in petroleum production levels which kept revenues down for Iraq. Throughout much of the 1980s, Kuwait's oil production was above its mandatory OPEC quota, which kept international oil prices down. Iraq interpreted Kuwait's refusal to decrease its oil production as an act of aggression toward the Iraqi economy The invasion of Kuwait was met with international condemnation, and economic sanctions against Iraq were immediately imposed by the United Nations Security Council in response. British prime minister Margaret Thatcher and U.S. President George H. W. Bush deployed troops and equipment into Saudi Arabia and urged other countries to send their own forces to the scene. In response to the call, an array of nations joined the U.S.-led coalition, forming the largest military alliance since World War II. The bulk of the coalition's military forces was from the United States, with Saudi Arabia, the United Kingdom, and Egypt as the largest lead-up contributors, in that order. Kuwait and Saudi Arabia paid around US$32 billion of the US$60 billion costs.