Germany in World War I

During World War I, the German Empire was one of the Central Powers. It began participation in the conflict after the declaration of war against Serbia by its ally, Austria-Hungary. German forces fought the Allies on both the eastern and western fronts, although German territory itself remained relatively safe from widespread invasion for most of the war, except for a brief period in 1914 when East Prussia was invaded. A tight blockade imposed by the Royal Navy caused severe food shortages in the cities, especially in the winter of 1916–17, known as the Turnip Winter. At the end of the war, Germany's defeat and widespread popular discontent triggered the German Revolution of 1918–1919 which overthrew the monarchy and established the Weimar Republic. Germany entered into World War I on August 1, 1914, when it declared war on Russia. In accordance with its war plan, it ignored Russia and moved first against France–declaring war on August 3 and sending its main armies through Belgium to capture Paris from the north. The German invasion of Belgium caused Britain to declare war on Germany on August 4. Most of the main parties were now at war. In October 1914, Turkey joined the war on Germany's side, becoming part of the Central Powers. Italy, which was allied with Germany and Austria-Hungary before World War I, was neutral in 1914 before switching to the Allied side in May 1915. Wikipedia 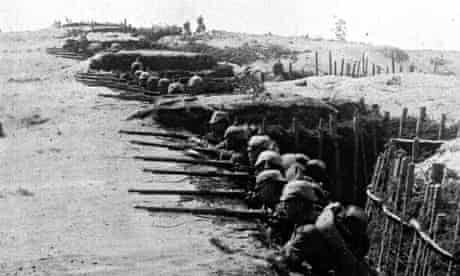