Welcome to the Reconstruction 1865 - 1877 Primary Source Guide. The purpose of this guide is to provide you the researcher with both print and links to online primary sources covering various subject areas pertaining to the Reconstruction Era. This guide is a live guide, and always growing as new links or subject areas are added. Good Luck in your research endeavors.

The Reconstruction era was a period in American history following the American Civil War (1861–1865); it lasted from 1865 to 1877 and marked a significant chapter in the history of civil rights in the United States. Reconstruction, as directed by Congress, abolished slavery and ended the remnants of Confederate secession in the Southern states. It proclaimed the newly freed slaves (freedmen; black people) citizens with (ostensibly) the same civil rights as those of whites; these rights were nominally guaranteed by three new constitutional amendments: the 13th, 14th, and 15th, collectively known as the Reconstruction Amendments. Reconstruction also refers to the general attempt by Congress to transform the 11 former Confederate states and refers to the role of the Union States in that transformation.

Following the assassination of President Abraham Lincoln—who led the Republican Party in opposing slavery and fighting the war—Vice President Andrew Johnson assumed the presidency. He had been a prominent Unionist in the South but soon favored the ex-Confederates and became the leading opponent of freedmen and their Radical Republicans allies. His intention was to give the returning Southern states relatively free rein in deciding the rights (and fates) of former slaves. While Lincoln's last speeches showed a grand vision for Reconstruction—including full suffrage for freedmen—Johnson and the Democrats adamantly opposed any such goals.

Johnson's Reconstruction policies generally prevailed until the congressional elections of 1866, following a year of violent attacks against Blacks in the South. These attacks included the Memphis riots in May and New Orleans massacre in July. The 1866 elections gave Republicans a majority in Congress, the power they used to press forward and adopt the 14th Amendment. Congress federalized the protection of civil rights and dissolved the legislatures of rebel states, requiring new state constitutions to be adopted throughout the South that guaranteed the civil rights of freedmen. Radical Republicans in the House of Representatives, frustrated by Johnson's opposition to congressional Reconstruction, filed impeachment charges; the action failed by just one vote in the Senate. The new national Reconstruction laws incensed many whites in the South, giving rise to the Ku Klux Klan, which intimidated, terrorized, and murdered freedmen and Republicans, including Arkansas Congressman James M. Hinds, throughout the former Confederacy.

In nearly all ex-Confederate states, Republican coalitions came to power and directly set out to transform Southern society. The Freedmen's Bureau and the U.S. Army both aimed to implement a free-labor economy to replace the slave-labor economy that had existed until the end of the Civil War. The Bureau protected the legal rights of freedmen, negotiated labor contracts, and helped establish networks of schools and churches. Thousands of Northerners came to the South as missionaries and teachers as well as businessmen and politicians to serve in the social and economic programs of Reconstruction. "Carpetbagger" became a derisive term used to attack supporters of Reconstruction who traveled from the North to the South. Wikipedia 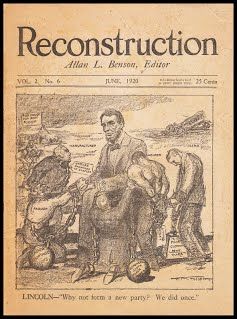