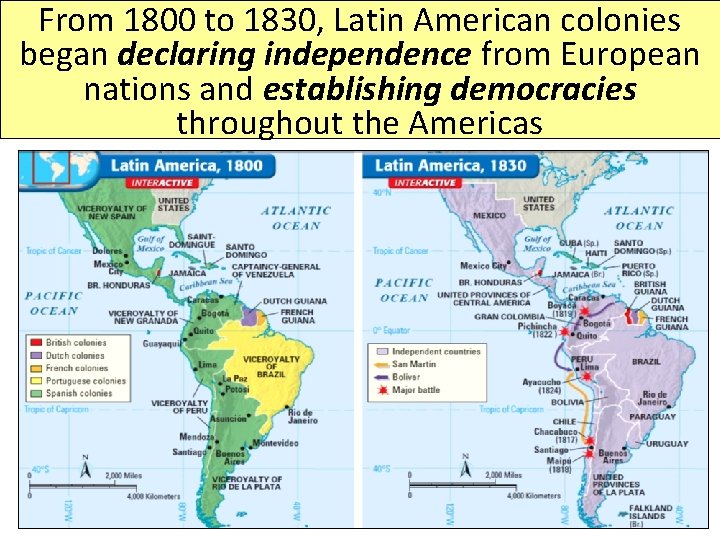 From: Latin American Revolutions by Slide to Doc

The Spanish-American wars of independence (25 September 1808 – 29 September 1833; Spanish: Guerras de Independencia hispanoamericanas) were numerous wars in Spanish America with the aim of political independence against Spanish rule during the early 19th century. These began shortly after the start of the French invasion of Spain during the Napoleonic Wars. Thus, the strict period of military campaigns would go from the battle of Chacaltaya (1809), in present-day Bolivia, to the battle of Tampico (1829), in Mexico.  The process of Latin American independence took place in the general political and intellectual climate of Popular sovereignty that emerged from the Age of Enlightenment that influenced all of the Atlantic Revolutions, including the earlier revolutions in the United States and France. A more direct cause of the Spanish-American wars of independence were the unique developments occurring within the Kingdom of Spain and its monarchy triggered by the Cortes of Cadiz, concluding with the emergence of the new Spanish American republics in the post-Napoleonic world.

The purpose of this guide is to provide you, the researcher, with the ability to do research on the subject area of Latin American Independence. You will have the ability to search the library catalog and access our databases and journals all from within this course guide. This guide also provides you with a list of Latin America Primary Source Websites, along with important information regarding library services and departments that may prove useful to you while you are doing research.