The photos under the tab, "Entering Florida," shows photographs about Crossing the Florida-Georgia state line, Jacksonville and surrounding roads.

First Part of the Florida Adventure 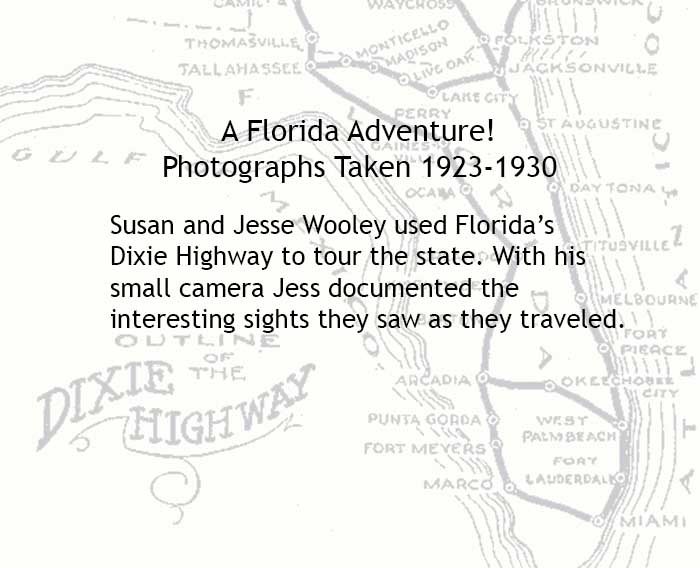 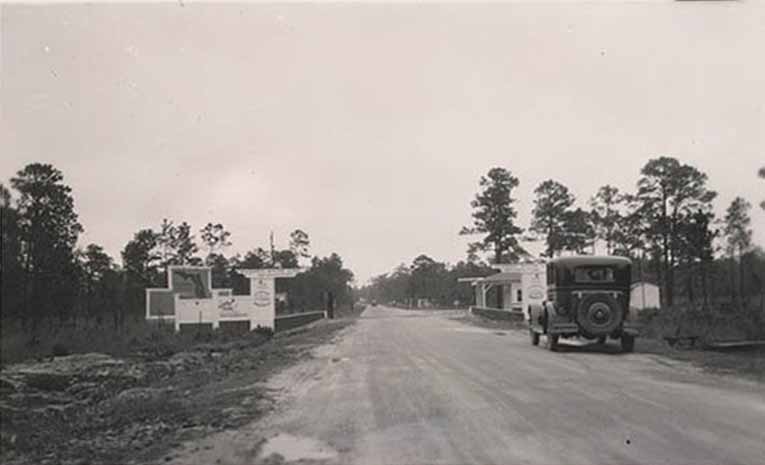 At the Florida-Georgia State Line - 1929

Wooly's Buick is on the side of the road with the welcome signs to Florida on the left. On either side of the road are longleaf pine trees. These trees covered thousands of acres in Florida north of Lake Okeechobee. 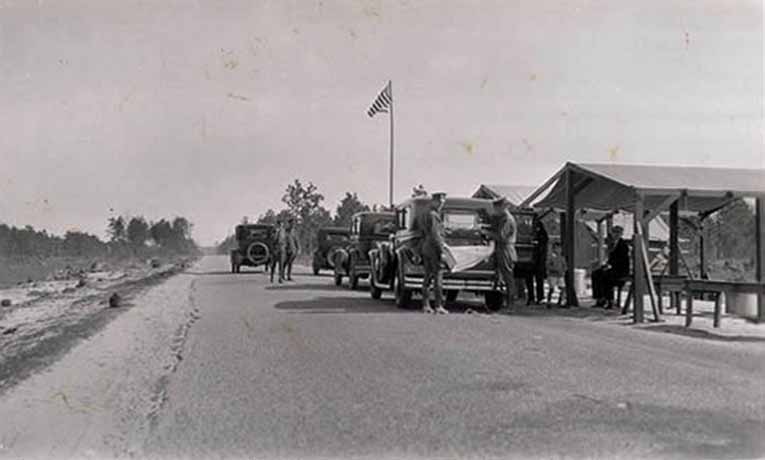 Inspection stations were common at state lines during in the early years of automobile travel. In Florida, it was mainly to check cars for fruit and the Mediterranean Fruit Fly. The fly was detrimental to citrus fruit.

Checkpoints were operated by the Florida Highway Patrol, and here two troopers search the contents of a car while a father and son sit in a tent. 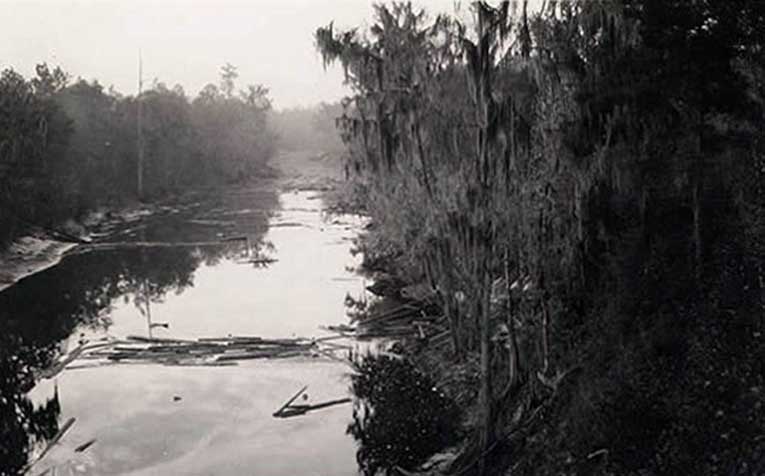 The Suwannee River greeted Susan and Jesse Wooley as they entered Florida from Georgia, and they drove near it as they headed to their first Florida destination, White Springs.

Both the Lincoln Highway and the Dixie Highway were organized by Carl Fisher who wanted to have good roads for early motorists. This map shows the routes of the North-South road - the Dixie Highway.

In 1915, the name Dixie Highway was given to the road to commemorate 50 years of peace since the end of the Civil War. Today the name is very controversially, and in some sections the name has changed. 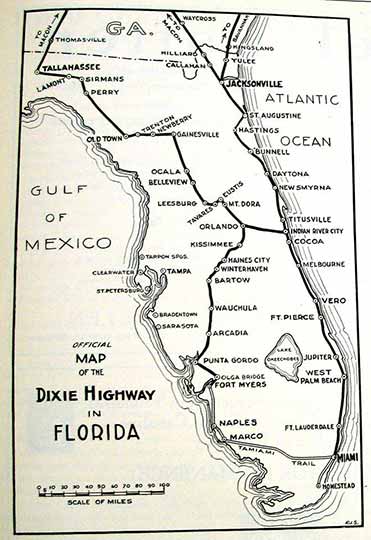 The Dixie Highway was made of existing roads and new additions that allowed motorists to travel the peninsula and to cross the state in a few locations. This map shows the Tamiami Trail as a planned extension to the highway. 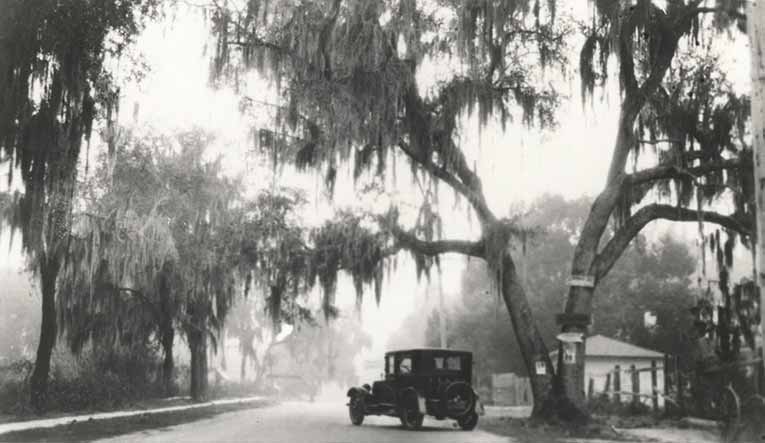 A car drives under a large Oak branch draped with Spanish Moss as it heads off on its journey. Road signs and other signs are nailed to the tree enhancing the spirit of adventure.

The location is White Springs, Florida just south of the Georgia State line, where the Wooleys spent their first night. 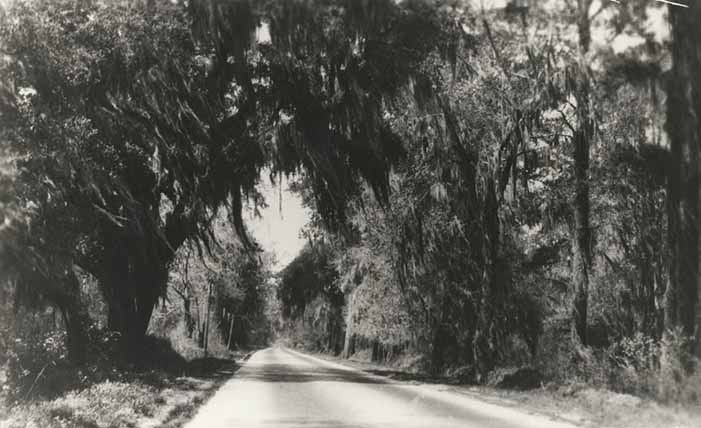 This area is typical of the Dixie Highway that Wooley drove to get from one location to another in Northern Florida. On both sides of the two lane paved road are live oaks covered in Spanish moss and long leaf pines. 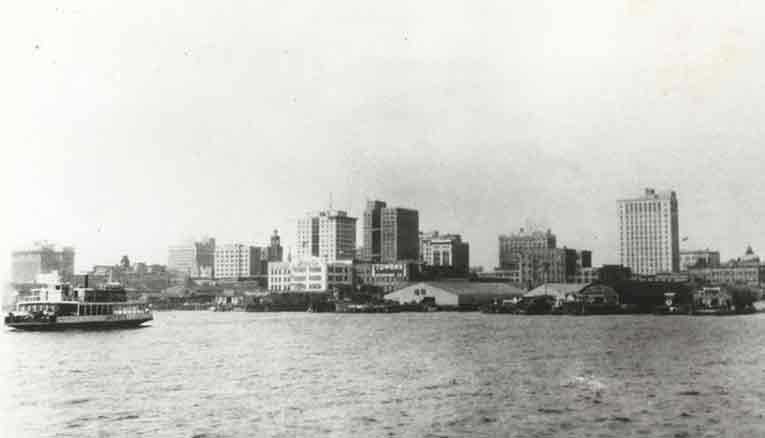 Wooley visited Jacksonville as part of his trip up and/or down Florida's East Coast. Jacksonville was Florida's largest city in 1930 with a population of 129,549. The city's urban center sits on the banks of the St. Johns River on which a ferry, left side of photo, is taking travelers from one side of the city to the other. 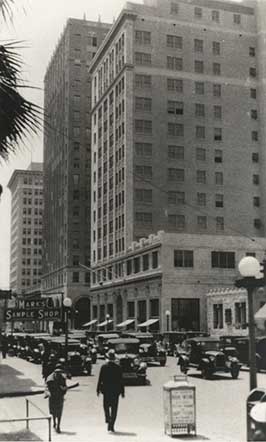 A busy city street in downtown Jacksonville with congested traffic and pedestrians on the sidewalks. Mark's Simple Shop is on the corner. 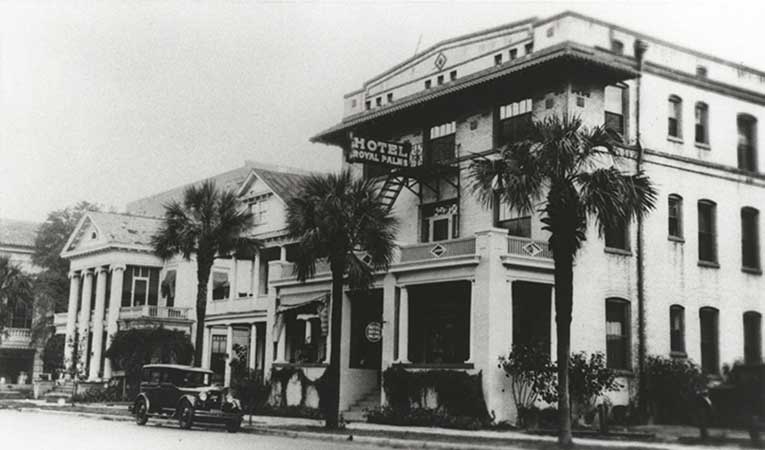 Susan and Jesse Wooley would stay at inns or roadside hotels as they traveled to and from Florida. When staying in a city they would stay in a boarding house or a hotel.They stayed at the Hotel Royal Palm on several occasions while visiting Jacksonville. 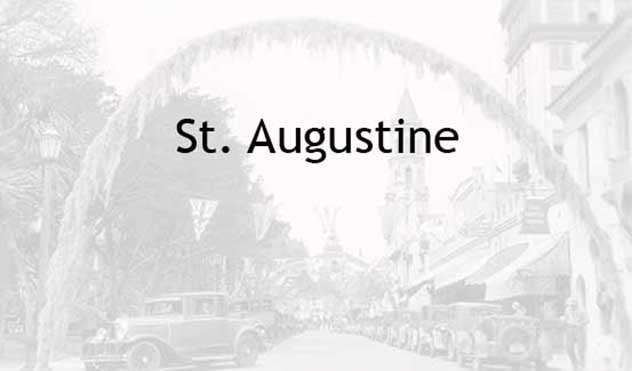 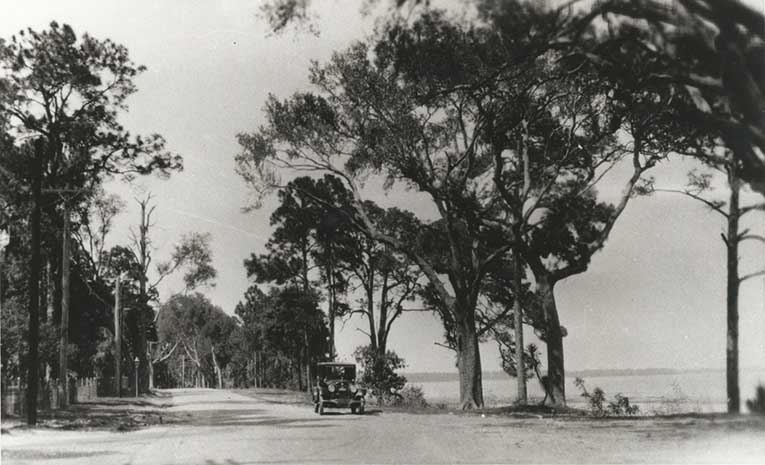 Before going to St. Augustine, Wooley went to Green Cove Springs and he took the road that followed the river. Here Wooly's car is parked by the side of a two lane paved road lined with trees next to the St. Johns River. 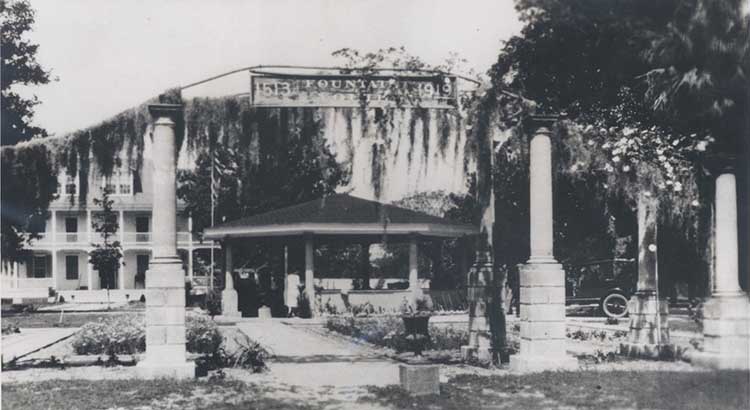 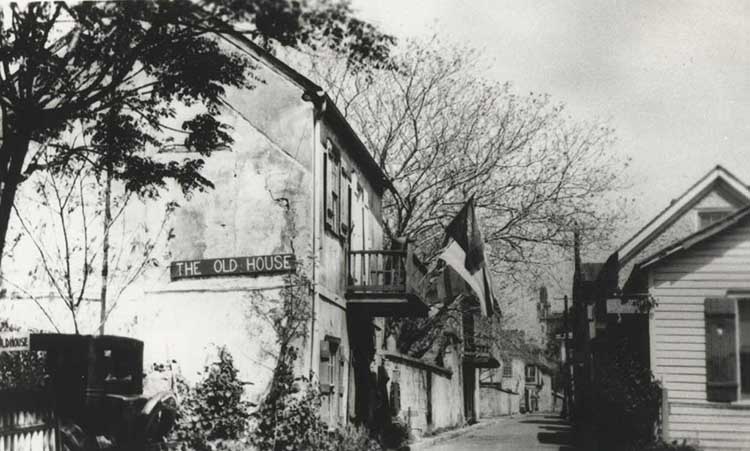 Pedro Menéndez de Avilés established St. Augustine in 1565, over 40 years before the founding of the Jamestown Colony in Virginia by the British. The Oldest House and the House's site at the National Park Service is one of St. Augustine's favorite places to visit. The house is not exactly the oldest house in North America but the dwelling site is since a house pre-dated the current one which was constructed in approximately 1723. 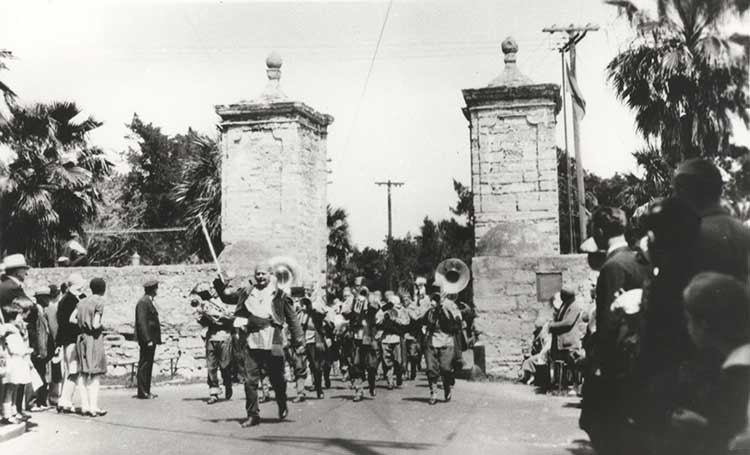 Juan Ponce de Leon (1460?-1521) landed in the area of Florida that would become St. Augustine. He returned to Spain and claimed titled to colonize Florida and the island of Bimini.

A man dressed as Juan Ponce de Leon enters St. Augustine Florida through the old city gates followed by a marching band. Tourists and residents enjoy the on "conquering explorer" and the marching band on the day dedicated to Ponce de Leon. 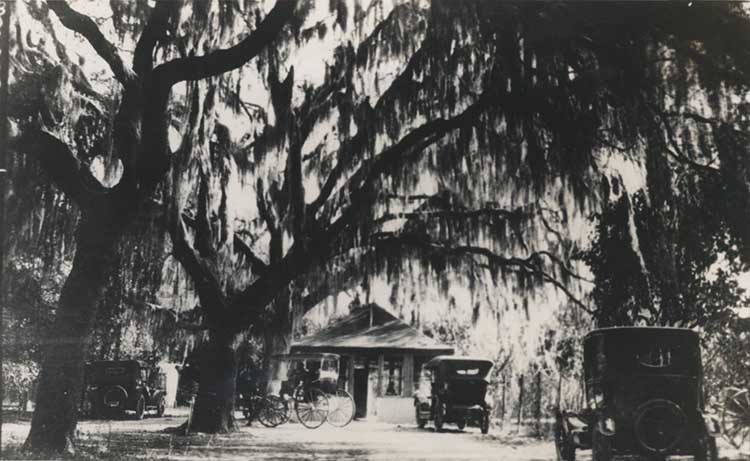 The photograph shows the entrance to Garnet Orange Grove in St. Augustine, Florida. Cars and a horse drawn buggy are at the entrance of the tourist site. Founded by Dr. Reuben Garnett in 1883 it quickly became popular with visitors to St. Augustine because of its enchanting entrance and stately centuries old live oaks. The grove was in existence from approximately 1883 to the early 1950s.